Matt Hadley – once ranked 4th in Canada for mountain biking – joined the McElhanney team in 2014. A trails technologist in Canmore, Matt has been an essential component of major projects such as the High Rockies Trail in Spray Lakes and Peter Lougheed Provincial Parks. His perspective as an avid and formerly professional rider has been invaluable.

Growing up in rural New Brunswick, Matt has been riding since age three, and fondly remembers the first time he rode a bike on his own.

“My mom would always run behind me, pushing me to help me balance,” says Matt. “One day a babysitter was looking after me instead and she just gave me a big push! I pedaled quite a ways down the road until I fell over and went into a ditch. After that they figured if I could make it that far, I could ride on my own!”

After winning his first local race at age 14, Matt was hooked! In New Brunswick, there were no real mountain bike trails, only trails for ATVs. So, Matt and his brother began building trails on their own land, before they moved onto the neighbours, and crown property – only sometimes with permission. Matt’s dad, a parks planner himself, began the “Hadley Challenge”, an annual event where local riders raced on the trails Matt had built.

While on Team Canada, Matt “advised” his friend Maggie Scallion at the Canmore Nordic Centre, who was building a race course. After realizing that Matt was incapable of just “advising”, Maggie asked Matt if he wanted to build the trail himself. Matt received a full-time position in 2011 building and maintaining mountain bike trails and grooming trails at the Nordic Centre. He continued in this position after retiring from the sport professionally in 2012.

In addition to his work with Alberts Parks, Matt also volunteered his time as a mountain bike coach for the Rundle Mountain Cycling Club and as a Trail Crew Leader for the Friends of Kananaskis. It is through these endeavors that Matt met Ron Sadesky (Branch Manager, Canmore) and Darin Langhorst (Project Manager, Canmore). Familiar with Matt’s history in mountain biking and trail building, and with McElhanney tasked with the High Rockies Trail project, Ron offered him a job.

Today, Matt is a vital part of the McElhanney Trails, Tourism, Parks, and Recreation team, and has worked on more than 25 trails projects for McElhanney. Matt estimates he and Darin covered 900km on foot for the High Rockies Trail project alone. When asked about the biggest challenges he faces as a trail builder, Matt said he must try to predict what end-users will want to do; “you need to build the trail where they want to go, or they’re going to create their own trail,” (and disrupt natural environments in the process.)

It is the years Matt spent racing that make him such a trailblazer in the field, particularly his understanding of speeds of travel. However, he says the time he spent building trails as a kid as well as at the Nordic centre has also equipped him with the hands-on experience needed to connect with contractors and design fantastic end products.

“I feel like I really know how to speak their language.”

Trail building professionally and spending a lot of his free time on trails means Matt rarely turns his brain off. However, his line of work has also given him various opportunities, such as the chance to work with Parks Canada in Gros Morne National Park in Newfoundland. While the park itself is stunning, Matt says a memorable moment was being helicoptered over the north rim to overlook the fjord while landing and hiking out to a cliff with a sheer 650m vertical drop down to the water.

Matt says the people and the on-going learning make his job at McElhanney so enjoyable; he appreciates constantly being challenged. His favourite perk of the job though?

Living in Canmore means his short commute time leaves more time for getting out on the trails! 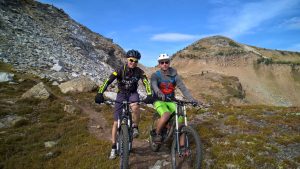 Matt and Tyler Wilkes (Geotechnical Engineer, McElhanney) in Revelstoke, BC