What is the best mapping and surveying technology for your mining project?

Project managers involved in mining and mineral exploration are often responsible for organizing contracts for surveying and aerial mapping services. It may also be up to these project managers to recognize when these services are required and, in some cases, to select which technology to use. This process can appear daunting given the increasing number of technologies available and the rate at which they have evolved.

Traditionally, when a project required mapping (i.e. remote sensing) with a level of detail and accuracy not available in the public domain, imagery and elevation data were obtained from air-photos acquired from manned aircraft. When features required surveying, a tripod-mounted instrument was used to record the positions of point locations, one point at a time, as a surveyor looked through the instrument.

Significant advancements were made in the 1990s with the proliferation of GPS use and robotic total stations, though surveying largely remained restricted to the capture of discrete points. High-resolution satellites with sub-metre resolution, aerial light detecting and ranging (LiDAR) units and, most recently, unmanned aerial systems equipped with digital cameras have now become standard technologies used for topographic mapping.

Where survey equipment was once limited to recording discrete points on features of interest, 3D laser scanners can now collect millions of points per second, capturing the detailed variability of features at centimetre point-spacing and with millimetre accuracy. With the exception of digital camera sensors vs. film, none of these advancements has rendered an older technology obsolete. Each of these technologies and methods has its niche today in the various phases of exploration and mining.

Here’s a more detailed look at some of the more commonly used mappigng and survey technologies used today, along with comments and suggestions on a few basic but important criteria involved when selecting from them.

Aerial mapping: Trees versus no trees

Data produced from aerial mapping technologies are determined either photogrametrically from overlapping digital images as in the case of satellites and drones, or with active-sensor technology such as LiDAR. Though many factors can influence the choice of technology, it often comes down to whether or not tree-cover is involved.

With photogrammetry, ground coordinates are determined by software as equivalent features seen in overlapping images are brought together stereoscopically. This is done either manually by a technician or automatically by software with a process known as pixel-matching. Conditions affecting the accuracy of photogrammetry include: slope steepness, the ability of software or personnel to match equivalent features across overlapping images (ground homogeneity makes it difficult) and, most importantly, the degree of tree cover or vegetation thickness. As it is necessary for the ground to be visible in order to determine a coordinate on the ground, accuracy suffers greatly in forested areas. 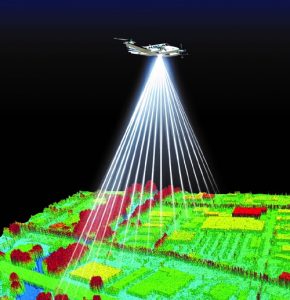 Aircraft-mounted 3D LiDAR units collect topographic data via the rapid firing of an infrared laser pulse, with modern units collecting up to one million 3D points per second. Depending on surface material, vertical accuracies from ± 10 to ± 20 centimetres are typical, with horizontal accuracies being only slightly less. In areas with forest cover, most pulses will strike leaves, but many pass through gaps in the vegetation to strike the ground.

In a well-designed survey, the distance between points on the ground under forest canopy rarely exceeds a few metres, allowing technologists to create highly accurate topographic maps and bare-earth terrain models.

Digital airphoto is often collected simultaneously but, unlike photogrammetry, the photos are not used in the derivation of elevation data.

When would you choose satellite imagery, a drone, or LiDAR?

Regardless of the method chosen, variable terrain and vegetation means that no single accuracy value can be expected to apply over an entire project area. Multiple technologies may be needed for some projects.

Conditions favouring drones include low tolerance for error (e.g., ± 5 cm), small project area, no trees and nearby access by ground personnel. Typical uses include volume calculations, high-resolution orthophoto (e.g., 3 cm pixel) for site monitoring, time-series analyses for monitoring mass-movement or interim material removal from pits, etc. With drone mapping rates at only a few square kilometres per day, larger projects may be completed more economically using LiDAR. Safety, always a consideration, can be greatly improved where surveyors would otherwise be required on potentially hazardous sites such as stockpiles, unstable ground or areas with dangerous access.

When selecting a ground-based surveying method, a main consideration is often whether it is more important to capture discrete point locations or the variability of a feature over a larger region.

Long-established technologies such as the total station are perfectly suited to capturing discrete features, such as drillhole collars, the ends of a pipe or anything where data for either a single point or a small collection of points will suffice for accurately describing a feature’s location, size, orientation or movement over time. This is the familiar situation where a surveyor sets up an instrument on a tripod and looks through it towards a target, capturing data with millimetre accuracy.

Features of high variability: The domain of the scanners

Essentially ground-based LiDAR units, laser scanners capture vast amounts of closely spaced data points from tripods or vehicles. Thousands of points per square metre are possible. State-of-the-art units record up to one million points per second at accuracies of a few millimetres and at ranges exceeding ¼ km – multi-kilometre range is possible with long-range scanners, though accuracy decreases with distance.

In geotechnical studies, e.g., tailings dam or pit-wall monitoring, millions of points allow the modelling of complex and subtle shape changes over time where historical methods would only allow for the detection of movement at widely spaced points (in real-time movement monitoring, fixed-position GPS or robotic total-stations are typically used).

For underground workings, in addition to tunnel location and dimension mapping, void-space calculations allow highly accurate estimates of the amount of rock removed.

Though considering a few criteria can simplify the task of selecting the most appropriate technology, it is best practice to discuss the project with a consulting firm before issuing a request for proposals, Your best bet for an unbiased opinion on the most appropriate method will be with a multi-disciplinary firm that has experience using a variety of mapping and surveying technologies.